Kubuswoningen, or cube houses, are a set of innovative houses built in Rotterdam and Helmond in The Netherlands, designed by architect Piet Blom and based on the concept of “living as an urban roof”: high density housing with sufficient space on the ground level. Blom tilted the cube of a conventional house 45 degrees, and rested it upon a hexagon-shaped pylon. His design represents a village within a city, where each house represents a tree, and all the houses together, a forest.

The Black forest contains 38 cubic houses, several shops, and three large cubes situated on a pedestrian bridge over the Black. It was one of the attempts to enliven the downtown area and to shift the focus from office buildings and traffic flow to housing and recreation. The Cube Houses and buildings around the Oude Haven (Old Port) were designed by the Amsterdam architect Piet Blom (1934-1999), who had previously designed similar experimental housing.

In 1977 Piet Blom got an assignment to study the area around the Old Port, which lay fallow since World War II. The development plan called for a high density urban living combined with other functions. The architecture had to be playful and was intended for the less well off. In the late seventies the progressive city council, installed 1974, gave priority to social housing and the revitalization of downtown.

The Amsterdam Provo architect Piet Blom (1934-1999) worked for years on the ‘Living as urban roof’ plan. . It is living in high density on a high level, so the ground remains available for various urban activities. Blom previously realized the Kasbah Hengelo(1973) and several cube houses and a theater in Helmond (1976). Blom thought that a plan for the Old Port was viable only if – a pedestrian bridge over the busy Blaak street would be build, so this area would be linked to the market and the library. The bridge would be like a Ponte Vecchio and enlivened by houses and shops. The cube houses form a canopy over the pedestrian bridge.

Three days before the first pole was driven in the ground, the client withdrew. In an amended plan of the original 55, only 38 cube houses were realized. To compensate, a residential tower was built, called the “Pencil.” Later Blom also designed the buildings around the Old Port, a social housing estatewith 250 houses combined with cafes and restaurants along the quay. The whole was realized in a high density and Mediterranean forms.

The cube houses, also called tree or pole house, consists of a tilted wooden cube with a point on a concrete hexagonal core. In this core the entrance and the stairwell are located. The cube has three levels: the “street house” with kitchen and living room, the “heavenly house” with the bedrooms and the “leaf hut” at the top. The core walls are the only vertical walls you’ll find, the rest of the walls are slanted.

Bridge The area around the Old Port, partly due to the excellent orientation to the sun, has become a popular entertainment center for tourists and students. Despite this rush, this has not led to much liveliness and activity in the public space underneath the cube dwellings. The small shops were impractical. They were soon replaced by workshops and small businesses who do not have to rely on visitors. A resounding success is the Museum Cube House, a cube as a museum house attracts many tourists.

The houses were renovated in the late nineties, including the public space. In particular, the replacement of the asphalt shingles on the roofs by a zinc roof has changed its appearance. For the two large cubes it proved hard to find a destination. The Academy of Architecture took residence in one cube in 1985. After the departure of the Academy and a few years of vacancy a perfect new destination was found in 2009: a hostel Stayokay. There are 49 rooms with 250 beds and private bathrooms. In the central atrium, with lift, a landmark ‘interior cube’ is hung. The interior is designed by Personal Architecture in collaboration with Kees van Lamoen.

Structurally, the cubes sit tilted on a hexagonal pole. They are made up of concrete floors, concrete pillars and wooden framing. Inside, the houses are divided into three levels accessed via a narrow staircase. The lower level is a triangular area used as the living room. The middle level houses the sleeping and bathing area, and the highest level is a spare area used either as a second bedroom or another living area. Completing the tilted design, the walls and windows are all angled at 54.7 degrees, providing excellent views of the surrounding area. The only drawback – aside from claustrophobia is that despite a total area of 100 square meters, the angled structure means only a quarter of that space is actually usable.

Three test versions were first constructed in 1974, and in 1977 18 houses were constructed in Helmond. The many houses required for a “woonwoud” (English: living woods) were never realized. The houses in Rotterdam were designed in 1977 in a plan of 55, of which 39 were built. The cube houses in Helmond surrounded a theater, Theater ‘t Speelhuis, which was destroyed by a large fire on 29 December 2011. 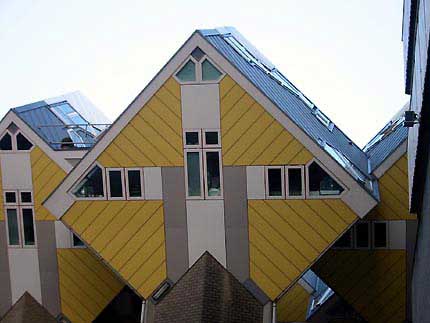 The houses in Rotterdam are located on Overblaak Street, and beside the Blaak Subway Station. There are 38 small cubes and two so called ‘super-cubes’, all attached to each other.

As residents are disturbed so often by curious passers-by, one owner decided to open a “show cube”, which is furnished as a normal house, and is making a living out of offering tours to visitors.

The living room of the “show cube” in Rotterdam.
The houses contain three floors:

The walls and windows are angled at 54.7 degrees. The total area of the apartment is around 100 square meters, but around a quarter of the space is unusable because of the walls that are under the angled ceilings.

In 2009, the larger cubes were converted by Personal Architecture into a hostel run by Dutch hostel chain Stayokay.

Piet Blom (Amsterdam, February 8th, 1934) grew up in ‘de Jordaan’, a working class district where life takes place on the streets. In ‘de Jordaan’ Blom developed his perception on work and living.

After having completed a carpenter and draughtsman formation, he signed up for the study of ‘Architecture’ at the Academy of Architecture where, among other teachers, he was tutored by Aldo van Eyk.